This is the second post of the series: A blend of Redux and ReactJs - State Management Made Easy!

If you are already comfortable with the core concepts of Redux, great! If you are just getting started with Redux, I would like to encourage you to read the first post of the series from here:

Redux and ReactJs: Let us build a Counter app

As the saying goes, "Small change wins equal Big things", let us focus on a small and simple app, Counter App using Reactjs and Redux concepts. In future post of the series, we will make the same app bit more complex and fun.

Here is the sneak peek to it. It is as simple as this:

Build it Step by Step - Get the foundation ready

We will be using the Create React App to build a new reactJs application so that, we focus on the learning in hand than other nitty-gritty.

✔️ Create the app structure and switch to the app directory.

react-redux is the official React bindings for Redux. The recent update with hooks makes thing unbelievably simpler that we will see in some time.

At this time, your package.json file must have these(the versions may differ though): 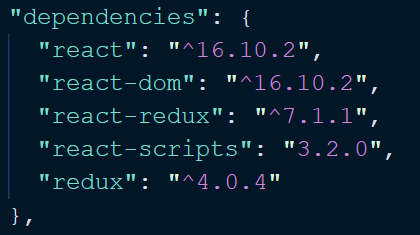 ✔️ Clean up: As the create-react-app comes with lots of boilerplate that we will not be using, let us do some clean up. Remove things from App.js file such that, it has only these:

Time to start the app by doing:

This should launch the browser and up the app @ http://localhost:300:

Counter App at the beginning

Build it Step by Step - Include Redux to the App

We have installed redux in previous step. We will first create two fundamental components of redux, action and reducer.

✔️ Create two folders called actions and reducers under src and create the files as shown in this image: 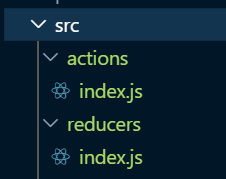 ✔️ Modify the index.js file under the actions folder and add the following actions:

For our Counter app we need two actions, INCREMENT and DECREMENT.

✔️ We are all set with the actions. Lets create the reducer. As you have seen in the React core concepts post, reducers are actually responsible to execute the actions and change state. We will be creating a reducer to increment and decrement Counts.

create a file called counter.js as shown in the picture below:

Let's create a reducer as:

✔️ Cool, so we have our reducer ready. But wait, what if we have multiple reducers in our app? Can we combine them into one so that, it can be exported and imported as one?

Why not? We can use combineReducers from redux to achieve the same. Modify the index.js file under reducers folder to add this code:

Note: We are creating a key for counterReducer so that, we can use that short-hand key to call our reducer. We will see that in a while. Imagine we have another reducer called, 'userReducer'. In that case, the allReducers to be created as,

Build it Step by Step - How about the Store?

Right, How about the Store? Where do we create it? Remember, we want to create the store and make it available to entire app? This thought takes us to index.js where we are bootstrapping the app as,

✔️ First thing first, let's create a Redux Store so that we can Provide the store to to App.

So we are using our reducers and creating a Store.

Build it Step by Step - Let's wrap things up in App.js

Well, we have created the Actions, Reducers and Store. Store is also made available to our App component. Let's use it and build an interactive Counter.

✔️ In App.js file, let us add 2 buttons one for increment and another for decrement. We will also add a placeholder for printing the Counter value as below:

✔️ We will be using two special hooks from react-redux to,

So, let is import them first:

Also import the actions as we have to dispatch to them on button clicks. Here is how the App component looks like:

That's all! The button click will dispatch the actions. Dispatching Actions will change the state in the Store using the Reducer. We select the counter state value and render it in our component.

You can debug this app same way you would debug any React based web app. But here is an awesome Chrome Extension for Redux.

With this, you will be able to track the State changes and debug things with ease. Here is a demonstration with the Counter app we just built.

All that we have done so far can be found in my GitHub Repo .

Hope you liked the post. In next post, we will structure the app with more components and manage state in more complex scenario. Stay Tuned.