Welcome to another post of the series, JavaScript: Cracking the Nuts. This series is all about visiting JavaScript fundamental concepts with more significant details. In this article, I am going to explain another important concept called Scope. We will also learn and appreciate the importance of the Scope Chain.

If you are new to the series and want to check out the previous articles, here are the links,

Thank you for showing all the love to the series so far, I really appreciate your feedback, likes, and constructive criticisms. I hope you find this one useful as well.

What will be the output of the following code execution and why?

Is it going to be cartoon, tom or undefined? But more importantly, how are you deciding on an answer here? Are you going by the Scope? What about the execution context?

The answer to the question I have asked above is, cartoon. Let us explore and understand it further.

In JavaScript, Scope is the mechanism to determine the accessibility of variables throughout their existence. It could be inside or outside of a function call.

Let us break the above code into pieces and see how the variable's accessibility changes depending on where the variable has been declared, and the functions are created.

Here are some of the key points from our Understanding of JavaScript Execution Context:

In the example above, there are two function invocations, tom() and jerry(). Hence there will be two different function execution contexts created. 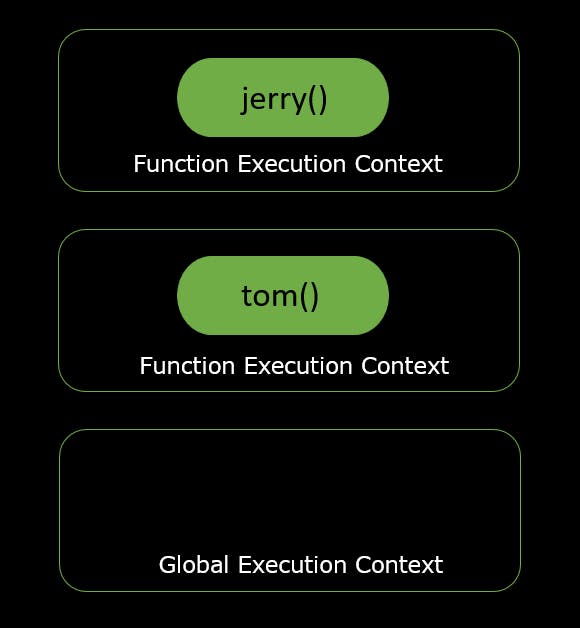 Who created jerry()? Where is it sitting lexically?

So far, so good? We also find, jerry() doesn't have a variable declared called name in it. In the execution phase, it tries to log the name variable.

In the execution phase, the JavaScript engine starts the look-up process following the outer reference of jerry() and finds a variable name created with value, cartoon in the global execution context.

Now we know why the answer to the question has to be cartoon, not tom or undefined. Here is the visual flow of how the scoping took place,

The whole process of looking up for the variable in the current execution context and outer references form a chain called the Scope Chain. We can also conclude that the variable name is in the scope of the function jerry() because it was successfully found in its scope chain. 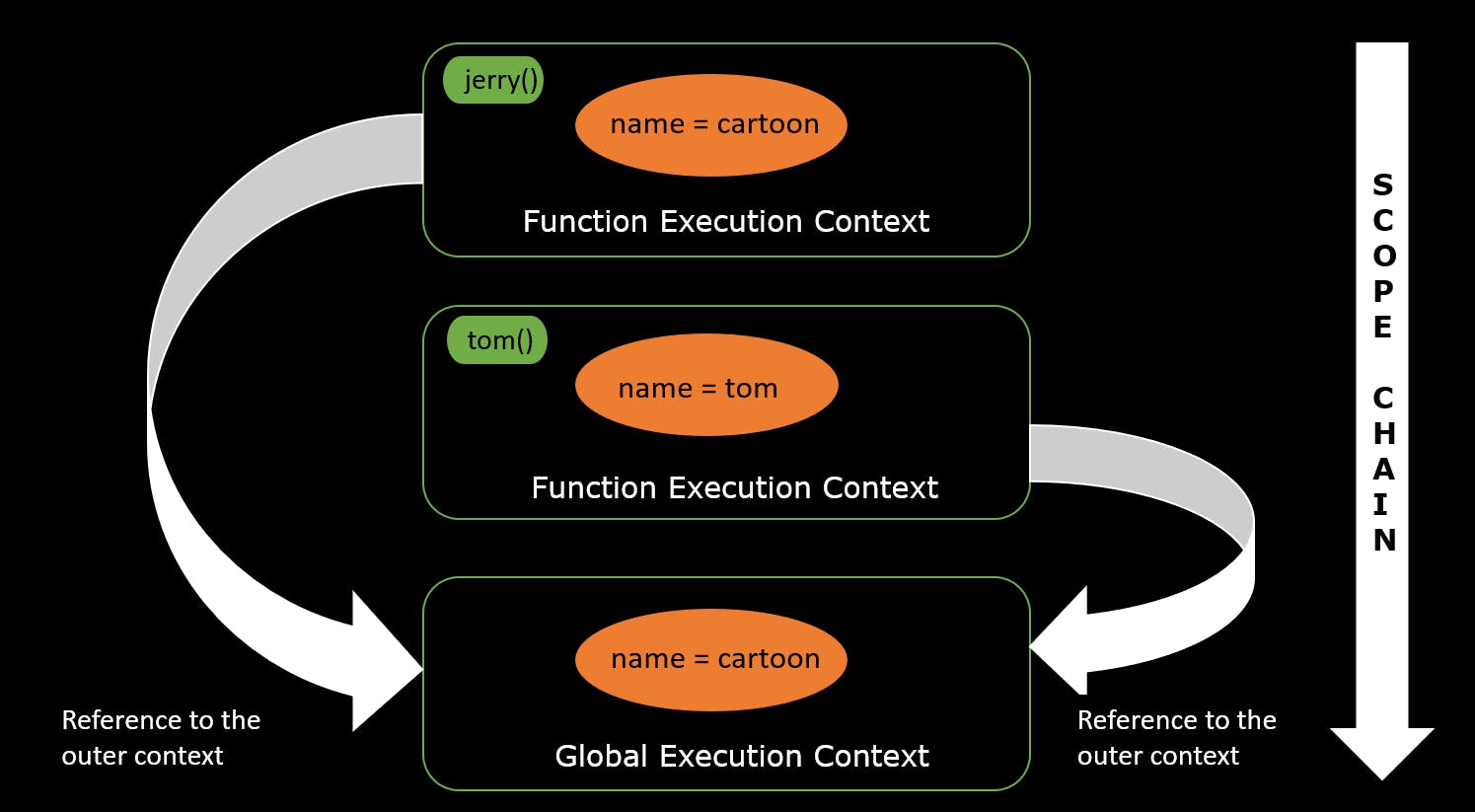 Change in the Chain

Quiz time again! What will be the output of this code execution?

We have made a small change in the above code. Now the function jerry() is created inside tom(). The reference to the outer environment from jerry()'s execution context will be pointing to tom()'s execution context. Hence the variable name will be found in the scope chain as defined in the tom() function. So you know the answer is, tom!

As we got the fundamentals of scope, let us understand what block scope is. A code block is defined by these braces {...}. If a variable is declared within a code block using a keyword called let, it’s only visible inside that block.

Had we created the variable name with var instead of let, we wouldn't have found this block scope restriction. Here is another example,

This is going to work perfectly fine and logs tom and jerry in the console.

Even for if, for, while etc, variables declared inside the block({...}) are only visible inside it. Here is an example with for loop,

Understanding scope with the fundamental concepts like execution context, outer reference, lexical positioning, etc., will help debug the tricky bugs(those horrible production ones) with ease. We, as JavaScript developers, will be more confident about how things work internally.

Here are a few references I liked and followed on this subject,

Up next in the last post of the series, I'll be explaining another fundamental concept called, Closure. Stay Tuned.

I love reading your entire Cracking the Nuts series! It's always so insightful and well-explained! Thanks!

This made my day!