JavaScript Modules and how to effectively work with Export Import

No one would like to work with the code having one gigantic JavaScript file with many unrelated functions. Moreover, when you need to use few of the functions from that file, you end up loading all the others unnecessarily. AMD was a great way of achieving modularization in JavaScript. Node.js already supports the module system using CommonJS.

Javascript(ES6)'s inclusion of modules was a game changer. We are able to take advantage of the modules functionality native way. In this post, I would like to introduce you to the JavaScript module concept and in-depth understanding of using the keywords export and import effectively. All the code snippet used in this post are in my gitHub repo .

In JavaScript, one script is one module. A module is nothing but a JavaScript file.

Modules can be used to keep the code footprint for a related area smaller, concise and as an independent unit. Using modules we can create reusable functionalities that automatically bring down the code quantity. 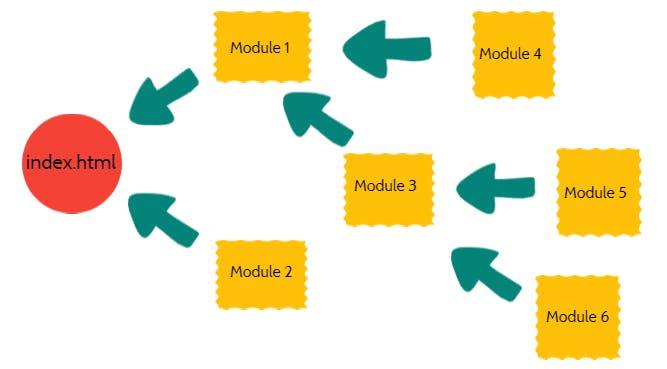 Basics of export and import

Modules can be loaded into each other by using the keywords, export and import.

Let us understand these with a simple example. Let us assume, we have a JavaScript file(a module) called, calc.js. It exports two feature functions called sum and sub. It is no brainier what these functions do, they do summation and subtraction respectively.

As you noticed, the export keyword is in-front of each of the functions. The module exports these two functions so that other modules can import and make use of it. Now lets see the import part. We will be importing these function to another module called, index.js.

Note, we first import both the functions with their names(sum and sub) from the module(JavaScript file), calc.js.

Finally, we will be importing(or loading) the index.js file to a html file say, index.html

Important to note that, we use the type called, module in the script tag while loading the index.js file. This is absolutely required. Specifying the type as module causes the code to be treated as a JavaScript module.

Export Together and the Aliases

In the above example we have seen, how to export the functions individually. We may have the situations where we need to export multiple things from a module. We can do all of them together.

As we see in the code above, we are not using the export keyword for each of the functions. We are just exporting them together in the last line. With this, we can just import the functions as we have done before.

Aliases - While importing a function from a module, we can chose to use an alias name instead. Consider the following example where we have used the alias called add for the imported function sum.

💥 Point to note here, once the alias is used, you can not use the old name to call the module features like function, variable etc. It is going to throw error:

Importing as a Namespace

At times, we may have a need of importing a large number of functions from a module. It would be tedious and too much of code to import them as comma separated as we have seen so far. we can short-hand this by importing them together with a Namespace. Namespace is nothing but a name of our choice. Let us take a look into this example:

As we see here, we are importing * which means all that are exported from, calc.js module. More important fact to point here is, we are importing the features by a name(Namespace) called Calc. As we did that, we can access the function using that Namespace.

Default export and When not to use it

JavaScript modules provide a special keyword called default with export to specify only one thing to export from a file. However technically, we can export both Named Export and Default Export from a single file but, we shouldn't mix them. Use either Named or Default export.

As we see the default keyword with export in above code. A default exported function can be imported two ways.

We can combine the multiple exports from various modules and do a combined export from a single file. This is also called, re-export or aggregating. Let us understand this with an example,

Native support of modules in JavaScript is an extremely useful feature. We should be using more of export and import in vanilla JS as we do with Node.js or any other library/frameworks like, angular, react etc. Point to note here, the import mechanisms we got to see here are called static import. There is another import mechanism called, dynamic import which I am going to cover in my next post.

With ES6, JavaScript modules are supported by most of the browsers on desktop and mobile devices.

Here is one online resource I would recommend for more in-depth understanding of modules: