Being Reactive - Usage of Virtual DOM and DOM Diffing

Stay in the loop!

Subscribe to my newsletter and stay up-to-date with my latest blog posts. Get an email every time I post something new.

It's been a while I am pushing myself to realize the essence of Reactive Programming. Starting with the implementation in Angular and RxJS, later with ReactJs and half a year back with Vuejs, I was in a state to dig more and lean something new about the concept.

This is the first post of a series to explain my journey on Reactive Programming, Virtual Dom and a cool new Offering that changed the perspective in a Big way! Stay Tuned.

How it all started

My initial attempt was to learn about Reactive Programming from the Wikipedia and I was like,

With time, I was introduced to many definitions and explanations. Here are few that I understood and could connect to:

Reactive programming is an asynchronous programming paradigm concerned with data streams and the propagation of change (The best part from Wikipedia).

Hard? Try this one.

Simple? Here is the most making sense one:

An Example of being Reactive

Here is a simple example of your application being Reactive:

Traditionally Framework / Library like, React or Vue allow you to write declarative state-driven code, but it comes with a cost. The browser needs to do lots of extra work to convert those declarative structures into DOM operations. The technique used for doing this is called, Virtual DOM Diffing.

Every time your app's state updates (for example when the greeting prop changes), you create a new Virtual DOM. The framework reconciles the new one against the old one, to figure out what changes are necessary and apply them to the real DOM. This reconciliation of Virtual DOM by comparing each of the nodes, attributes, values is called, Virtual DOM Diffing. 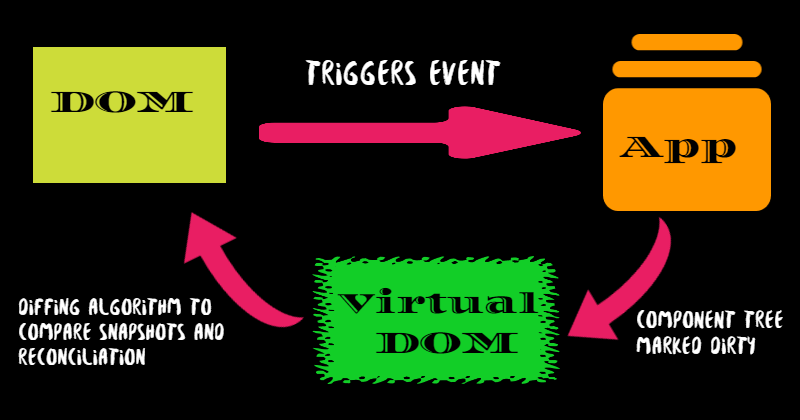 You can't apply changes to the real DOM without first comparing the new virtual DOM with the previous one and reconciliation is mandatory. Let us step through the GreetingMessage example mentioned above:

Let's assume the greeting prop changed from Hello, How are you? to Hola como estas.

If you notice, as the structure of the DOM remains same, the comparison goes on until the Step 3 where the text change was found. This is expensive and it costs the application most when this comparison takes place at the run time on the Browser. The user of our application may pay the penalty of this cost based on the nature and the implementation of the app. Isn't it something to worry about?

Please be assured that, I am not picking on any framework/library like Reactjs or any other that provides the mechanism of Virtual DOM computation. These frameworks are fast to manage the cycle to DOM update. But it is not in the scope of these frameworks to stop programmers from writing bad code. For example, a bad code in react can make the render() method to get called multiple times unnecessarily. If the code is less buggy, we can leverage the potential of Virtual DOM much better way.

But, there is more to it!

As indicated at the beginning, this is the first post of a series. Stay tuned to get the next one.

Hope you liked the start. Please follow me to read my future articles.